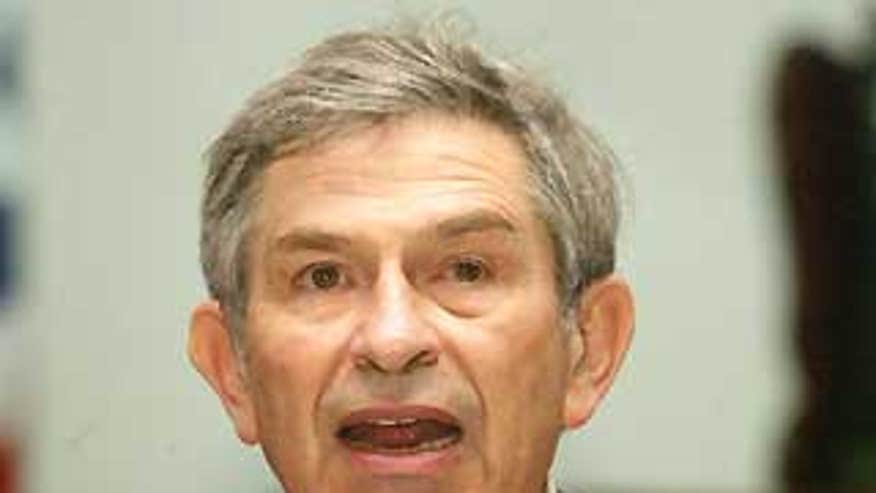 Can World Bank president Paul Wolfowitz survive in his job? Increasingly, there is speculation that he cannot.

Wolfowitz, 63, is facing the biggest crisis of his career: a scandal involving promotions and pay hikes to his girlfriend that threatens his control of the world’s largest and most influential anti-poverty institution, which doles out some $20 billion annually in loans and grants to developing countries.

After a week of shifting explanations by bank officials, a clearly-beleaguered Wolfowitz on Thursday announced at a Washington press briefing that he made "a mistake for which I am sorry" over his handling of a promotion and huge pay increases for bank staffer Shaha Riza, who had a romantic relationship with Wolfowitz that precedes his appointment to the bank’s helm in 2005.

Wolfowitz declined to elaborate on what those mistakes were - but said he now regretted having been involved at all in her job-related negotiations at the bank. And, within hours of his apology, the bank’s ‘staff association,’ made up of half the bank’s 10,000 employees, called for his resignation.

The Riza controversy is overshadowing the bank’s semi-annual meetings in Washington this week, in which 10,000 visitors — including delegates from the bank’s 185 member-countries, the IMF, interested Non-Government Organizations, private bankers and the press — are taking part. In addition, a meeting of G-7 finance and development ministers is set for Friday, when Wolfowitz continues his drive to get rich nations to replenish the bank’s coffers.

The pressure has been building rapidly on Wolfowitz, following allegations that he may have broken bank rules in ordering hikes in job status and pay for Riza. (Both are divorced.) The main problem is that Wolfowitz may have done this without consulting organs of the bank board that would otherwise deal with such conflicts of interest.

A special committee of the bank’s board of directors is currently considering the issue, and Wolfowitz has said he will “accept any remedies” the board proposes.

The controversy dates back to 2005, when Wolfowitz, then the Bush Administrations No. 2 man at the Pentagon, joined the bank. At that time, Riza, who joined the bank in 1997, occupied a communications advisor job involving the Middle East region. In recognition of Wolfowitz’s conflict of interest as her ultimate boss, Riza was moved to a post at the U.S. State Dept. where she worked directly for Liz Cheney, the daughter of the vice president — even while remaining on the Bank payroll. Her job title was bumped up to a managerial level.

Wolfowitz’s opaque apology came only hours after the Financial Times reported that Wolfowitz - contrary to earlier statements made by him and his top aides — had personally ordered the bank’s human resources chief to offer Riza the pay rises. The Financial Times cited sources in the bank who allegedly saw a memo on the subject written by Wolfowitz in August 2005.

Editors at the Financial Times are also calling for his resignation. But when asked by reporters at the Thursday briefing if he would step down, Wolfowitz dodged the question by responding, “I take full responsibility for the details. I did not attempt to hide my actions nor make anyone else responsible.”

While it still remains unclear just what those details are, it increasingly seems that Wolfowitz had a direct role in Riza’s salary hikes and job-related negotiations that may have gone beyond what the bank’s board was aware of. Wolfowitz insists he acted as he did in order to shield the bank from the potential threat of a lawsuit by Riza, who was forced to leave because of bank rules that prohibit employees from working for anyone with whom they are romantically involved.

In fact, as with so many other Washington scandals, it’s what Wolfowitz did after the alleged offense that is causing the greatest problems. But that is further complicated by the ill will he has generated in a take-no-prisoners effort to change the bank’s bureaucratic and corruption-ridden culture and lending practices.

Since taking charge of the bank, Wolfowitz has made “good governance” and “anti-corruption” the highlight of his agenda for the bank’s 185 member-nations, but his blunt and aggressive style has now turned the spotlight on his own actions.

Wolfowitz has spoken often about the need for more openness and transparency and less cronyism in governments and World Bank lending, and he has infuriated his 24-member board - dominated by borrowing nations - by trying to attach anti-corruption conditions to loans, and sometimes blocking suspect loans outright. But the handling of the Riza scandal is becoming a case study of how well Wolfowitz follows similar rules.

“I think this whole thing would have blown away,” says a former top official at the bank, who told FOX News that he is providing details about the alleged scandal to the ad hoc board committee that is probing the matter. “But it’s the kind of thing where you try and manipulate the truth, to pin it on other people, and just not be straightforward.”

Even so, the former insider adds, “he [Wolfowitz] gave her a very substantial salary raise, completely beyond the parameters of the bank, and — most importantly — he didn’t consult about it with the appropriate bodies.”

News of Riza’s move to the U.S. State Dept. was first broken in 2005 by a blogger for the Village Voice, but the story gained traction in late March, 2007, when the Washington Post ran a column based on information from Riza’s personnel records at the bank. At that time, Wolfowitz spokesman Kevin Kellems - who himself earns a tax-free salary of $240,000 at the anti-poverty agency - told the Post that “all arrangements concerning Shaha Riza were made at the direction of the bank’s board of directors.”

Board members began swiftly and furiously denying that the board gave any such directions.

Next, on April 5, a “senior bank official” told the Financial Times that the terms of Riza’s deal were approved in 2005 by the “ethics committee” of the board — and not Wolfowitz — while Reuters reported that a “bank official” claimed that the bank’s general counsel at the time, Roberto Danino, had negotiated the deal. A day later, both Danino and the former head of the board’s ethic committee stepped forward to challenge that version of events.

“It was entirely up to management [Wolfowitz] to determine the specific terms and conditions,” stated a spokesman for Ad Melkert, the former head of the ethics committee. Melkert added that the committee members “were not aware of, nor did they approve, the details of the agreement.” Danino, the bank's former general counsel, who has told FOX News that he is “no fan of Mr. Wolfowitz,” has issued his own denial that he was involved in any way with the “implementation” of that committee’s advice.

Wolfowitz finally stepped forward himself on April 9, with an e-mail to the bank’s staff. While accepting “full responsibility,” for the imbroglio, he insisted that he had “acted on the advice” of the bank’s ethics committee. But Wolfowitz declined to specify exactly what that advice was —infuriating staffers further. In a statement today, he added, again vaguely: “I made a good faith effort to implement my understanding of that advice.”

By April 10, hundreds of staffers had posted angry anonymous responses to his e-mail . Among them: a complaint that staffers in the Middle East region — where Riza worked — “have had minuscule increases over the past years and been told by management that there would be no promotions (over the last 2 years) due to lack of funds.”

Yesterday, an exasperated Wolfowitz again dodged a series of questions by reporters. " I don't think it's fair to the rest of the [anti-poverty] agenda to take up this valuable time." But in an effort to clear his name,Wolfowitz's office requested that the bank's board make public the confidential communications between him and the ethics committee regarding Riza. To date, they have not done so.

Amid all the melodrama, the bank's frenetic rumor mill has been working in overdrive. The gossip now swirling through the bank's Washington corridors includes allegations that a very senior bank official even ordered the destruction of the Human Resources paper trail in the case. But former general counsel Danino, who appeared before the fact-finding committee on Tuesday, told FOX News he has no reason to think that's true.

"They have the paper trail," he said.

"What I saw is the complete paper trail. I have seen nothing missing."

What happens next, as Wolfowitz has said, will depend on how the bank's special investigating committee judges the situation. There was no information available as to when the committee would report—or whether that report would be made public.

Also on the Web

Modern slavery generates profit of over $32 billion(WALK FREE)Parents of baby allegedly killed by Irish nanny in Boston speak of “heartbreak” (VIDEO)(IrishCentral)Friday Rant: No More Chief Anything Officers (Service Provider IT Report)Bomb exploded in suspects face, he “forgot about daylight savings”(IrishCentral)No Jail Could Hold Harry Houdini (Learnist)TentSquare: A New Twist On The Production Experience(Variety 411)

Bond on a Budget

FacebookTwitterGoogle+LinkedInRSSNewslettersFox News Back to Top

Ambassador-at-Large of the Russian Ministry of Foreign Affairs

Our Spring Sale Has Started

You can see how this popup was set up in our step-by-step guide: https://wppopupmaker.com/guides/auto-opening-announcement-popups/